Sharing my life with animals is such a joy.

And having to say goodbye is the pits. 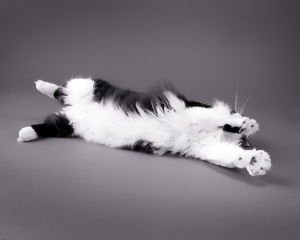 I had to say good-bye to Louie, my wonderful, registered therapy cat. He was young for a cat, only about 9 years old. But what  a life he has had. 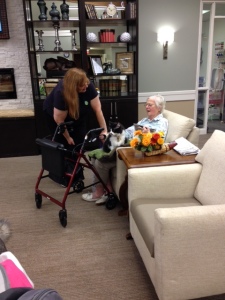 I really do not even remember what year Louie came into my life. But I do remember I had been looking for a cat that had the skills to be a therapy cat after my first therapy cat, Midnight passed away.  I had been looking for about a year. Friends of mine in rescue would call me to go and check out a feline somewhere that they thought would be a good fit. But the cats were either terrified of dogs, scared of other cats, didn’t like to be held…………..they just were not “the” perfect cat.

One day, out of the blue, a friend emailed me about a cat that was in a po’dunk city shelter, about an hour and a half north-west of Dallas. She described him and then sent me a photo. I took one look at this beautiful black and white guy with his beauty mark on his nose, and said,”that’s him, he is mine”. I drove out to this shelter, which was off of some dirt road, in a one room shanty. They had 3 crates for dogs, two of them outside, and the animal control officer was also the “shelter” worker. Louie had the run of the “shelter”, so the animal control lady, scooped him up, put him in my car, shook my hand and off this new cat and I  went. 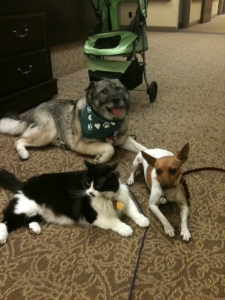 Louie and his therapy friends

Louie was a wonder cat. I swear, he thought he was a dog. I taught him commands, put a harness and leash on him and we took our first therapy evaluation. Oh my, even the evaluators couldn’t wait to put their hands on him to pet him. We, of course, passed with flying colors and that was the start of Louie’s career of bringing joy and comfort to those that needed it the most.

He was not a huge fan of little kids, but boy, did Louie love the senior population. We visited many senior living centers and rehab facilities. I always took Louie into a facility in a stroller. He was 13 lbs and too much for me to carry in a carrier everywhere. Folks would see us coming, take a double take, and say, “is that a cat?”. “Yep, It’s a cat. Would you like to visit with him?” I would put Louie’s blanket down in their lap and then put Louie on the blanket. “Settle in” I’d say. And he would lay down, start purring and making muffins. Oh my gosh, The smiles on folks faces was enough to make me explode with pride.

Then one day, I took in a couple of new dog fosters. Everyone seemed to get along just fine. We all lived in peace and harmony for several years. Until the fateful day I came home and found the foster dogs had killed several of my cats. I was devastated. Thankfully, Louie was one that survived He was very frightened, but not harmed. What in the world was I going to do? The rescue group had disappeared, leaving me with their dogs. And now I was worried for Louie’s life.

I called my vet. I needed help. How could we keep Louie safe but not re-home him? Hum, maybe he could become the clinic cat? And I could still pick him up and take him to nursing homes? And see him whenever I wanted?

My veterinary guardian angel said he could live at the clinic if he got along with the current kitty resident, Whisper. I was told she (the cat) didn’t like other animals, especially cats. I don’t know if it was Louie’s handsome good  looks, or his funny antics, but Whisper decided he was fine. 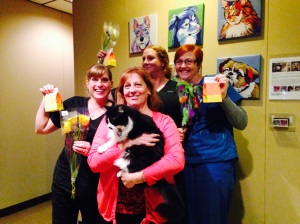 That is how Louie came to live at East Dallas Veterinary Clinic. Not only did the clinic and staff became Louie’s home and family, it became my second home as well. I practically lived up there seeing Lou all the time. I’d pick him up on a Saturday morning and off we’d go to visit folks that needed us. Sometimes I would walk him in his stroller around White Rock Lake. And in recent years, when we finished our visit in the Alzheimer’s unit, the other Pet Partner and I would go to lunch. Two humans, one large Norwegian Elk hound and Louie the cat. In his stroller. With the convertible top down! All the waiters knew us when we walked in. Who in the heck takes a cat out to lunch? Me, the crazy lady with a truly amazing cat (dog wanna be). 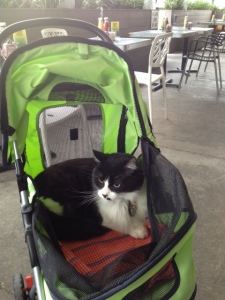 Louie out to lunch

There are so many funny stories about Louie and his visits. One lady used to sing to him Take me out to the ball game. When I was asked his name and someone could not quite grasp it, I would tell them it was like Louie Armstrong. “Ah”, they would say…..Louie!

Louie absolutely LOVED living at the clinic. He brought so many people comfort when they lost their pet, and laughter at watching his silly antics. They would say he saw ghosts. He would stare at a spot on a door, seemingly at nothing. But whatever it was, Louie saw it. He would spend time in the big windows watching the birds, or play chase and fetch with one of the vet techs. The minute he saw me, he would run to some hidden part of the clinic. I was the only person he ran from. I swear he thought I was going to take him home.

Louie was a character. Many nights, 30 minutes before closing, he would disappear. Because Louie used to open bags of dog food, he had to be put up at night. So before someone could grab him for the night, he would use his paws to open one of the cabinet doors and hide in them. Some nights it would take a good hour to find him. Boy, what a toot, And so sly, this silly man was. If someone was walking out the back door to go to the grooming/kennel area, he would sneak himself out the door without anyone knowing. When the staff member came back to go inside the clinic, there was Louie, sitting outside the back door.

This last year, I could tell something was not quite right with Lou. Our visits to the nursing homes were not going well. He was impatient with visiting folks and would sometimes just take off walking down a hallway. Me following him while he walked on his leash.

The last few months have been difficult for Louie. He was not feeling well and appeared to be in some pain. Dr. Ellsworth did all she could to keep him comfortable.  This last week, Louie told us he was no longer up to it. So it was with a lot of thought and prayers, that I told Louie he could move on. His passing was quiet and easy. In the home that he loved so much, surrounded by the family that loved him. He gave so much of himself to others, he healed many hearts and now there is a big hole in mine with his passing.

I hope you were lucky enough to have met Louie a time or two, and been chosen to have him tap your arm with his paw to tell you he wanted attention. Or a treat.

For all of you that loved him as much as I did, I thank you. Louie had a great life.

He will live in our hearts forever. 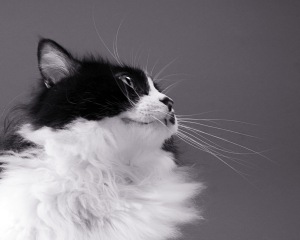 Folks have been asking where they can make donations in Louie’s Memory. Here are two organizations that were near and dear to us. The Dallas Alzheimer’s Association  as that is the population we worked with and loved. Or Pet Partners, which is the organization that we were therapy registered with.  Thank you for your kindest thoughts and actions. It is amazing to me how many lives Louie touched.

9 thoughts on “Louie the Great”